Romp is in full swing, make sure you stop by and see all the things! Seraphim did a great gallery of all the things here: http://seraphimsl.com/2017/05/12/get-elegantly-kinky-with-romp/ These panties from Miss Chelsea have to be one of the sexiest pieces of lingerie in Second Life right now, so do yourself or that special someone a favor and make your way over to Fameshed and pick them up. As a side note – one pair of panties is 200L but you can get four pairs in the set for 400 – so that is like two pairs of panties for free! But yeah, you need them and they also come with some super cute Pasties.

On Wednesday, Slink had a new release which was a long awaited fitted mesh body called Slink Physique. I’ve been playing with it most of the day and I’ve even taking a few photos. Even in the most elaborate of poses, when it’s time to edit your photos there is not much that needs to be done to them.

I am using the appliers from Glam Affair that are at out the store now with this mesh body.

In the pack there was also an example of what you could wear with this. There was an underwear set and a dress as shown below.. you will have to spend about a half hour or so playing around with this and discovering what works best for you.

Some tricks and tips for the Slink Physique
I found that there was a little gap between the hands. You could wear bracelets to hide it or what I did was use the next smallest size slink hand which was XS. The feet don’t fit perfectly but it’s close enough and in the right wind light it doesn’t matter.

I suggest Avatar Opt 2 as a windlight because it’s pretty bright even on low graphic computers. I would also suggest enabling basic shaders and atmospheric shaders if you can.

The neck was a bit of a problem area for me but something that did help was going into edit my shape on the chin tab and I played with the chin depth and jaw angle and that helped quite a bit. Another thing that helps is good wind lighting and bumping up your graphics a little. 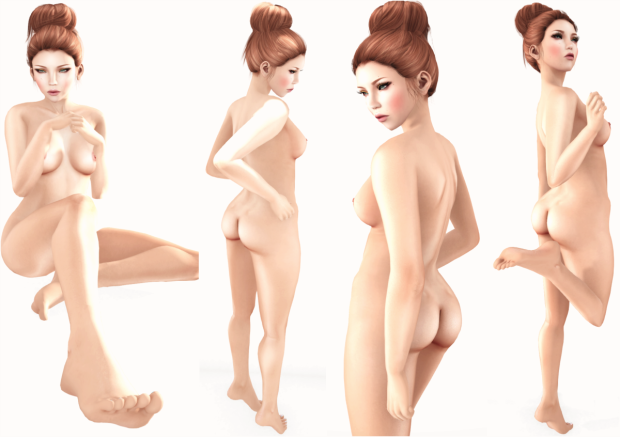 Thoughts
I like this body a lot, even better than the WowMeh. I can see myself using this one for more than just photos. I like the knees a lot and how when you sit you don’t have all that jagged weirdness on system bodies. I like that even though it’s mesh it’s fitted mesh and you can give yourself a little extra love in places that you were not able to before.

I don’t know if this is a possible thing but I think fitted mesh hands and feet should be the next thing to come along to go with the body. You start to feel like a bit Frankenstein after awhile with all of these mesh parts but this is the closest that I’ve come to having everything I’ve wanted in one item.

Sure, there are things that I’d like to see slightly improved but it’s pretty damn close to being perfect.

The HUD
The HUD is a bit too small on my screen. It’s hard to see the smaller buttons at the top on my Firestorm Viewer. One thing that you should take note of is on the alphas there is a sort of sheath to add a neck layer or hide it. I saved myself a lot of frustration unchecking this.

When I figured out how to do that I was happy. It worked best for me to hide it. The have a FAQ right here: http://docs.slinkstyle.com/physique/customer/ I imagine and hope that it will have more information as well as photos time goes on.

One thing that I would love changed about the HUD is that lets imagine when you are wearing shorts. Say the shorts are a bit lower in the front than they are in the back. It would be nice if you could hide something in the front that you can’t hide in the back.. or vice versa cause otherwise you might have to wear different shorts depending on the top that you are wearing.

The alpha HUD hides most parts but I would love to see that as an update one day. I think that you will be able to wear many basic things but you wont be able to wear say racer-backs and stuff with stranger parts that need to be alpha’d away. But with the fitted mesh dress that came with it in the pack it was perfect.

In closing, I’m super excited about this and what it will bring as far as new content creation. I feel like it’s going be something that will tie everything else in together and once it catches on it will be a must have and at 1250L it’s really a steal. I’m very impressed!

The poses that I used in this post are from Flowey except for the first pose which is from Infiniti. My look today is based around this pose that I found called Lakshmi, from Infiniti in a Gacha at Tales of Fantasy here: http://maps.secondlife.com/secondlife/Amorosa/45/173/33 What I’m wearing is hair and starry barrettes that is from Olive that you can play to win at the Arcade. My outfit is from Tee*fy at Collabor88 and my sandals are from Fri.day at Collabor88. My skin is the Romy skin from Glam Affair. Another Candy Fair post update from me today! I am showing this pose from Infiniti poses by Brandi Monroe which has about six different poses to do with yummy gum balls! There are six different packs of mails from Petite Bowtique in a little “salon”. The ones that I’m showing above are the “Rock Candy” set. My favorite are the pink ones!

The store is decorated very cutely and the best part is you can have the same nails as your kid! These nails work on either on the Slink Hands or there is a pack available for kids that use Toddledoo bodies.