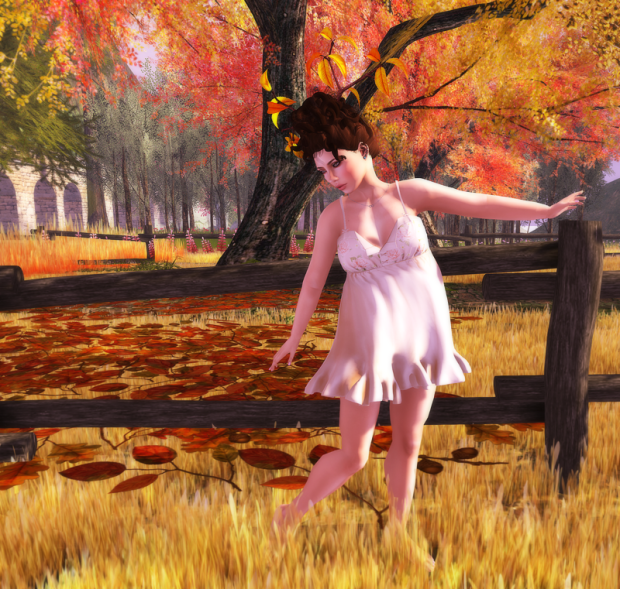 Even though I didn’t get into the Arcade Gacha yet a few previews have come my way and I was able put them together and take a few pretty pictures.

This hair is from Tableau Viviant and is very cute with its sprigs of autumn leaves and springy curls. This night gown is from the Tee*fy Gacha and this skin is Candy from Glam Affair.

These three things you can get at the Arcade Gacha when it opens on Sunday. It’s only one day away.

This sim is one that I found from reading Ziki Quest’s blog of wonderful travel ideas – this particular sim is called “Small town Green” and you can read her take on it here: http://zikiquesti.blogspot.com/2013/08/small-town-green.html

My poses are from Exposeur.

Who doesn’t love a good pair of sneakers?

Petite Bowtique is a vendor in the Woodlands Treasures Gacha Festival opening on September 1st. At only 40L a play you get get these sneakers that fit kids and adults and I’m wearing these over my Gos Bare-feet so they are fully re-sizable and there are even some that would be perfect for boys!

So this coming Sunday make sure you go give these a peak! http://maps.secondlife.com/secondlife/HullaBaloo/49/107/27

When I first saw the Imaginarium Librarium set from Sienia Trevellion of Lark for the September round of the Arcade Gacha festival I squealed with happiness.

I was so thrilled to see these books – these little pieces of amazing art that she had made. Like what books are about, what art is about – she gets it. Books take you places, words jump off the page and paint a tapestry in your mind. This is what the Imaginarium Librarium represents to me, imagination jumping off the page.

I tried to take a photo of everything, but my photos do not compare to seeing this set in person, it’s truly a work of art. 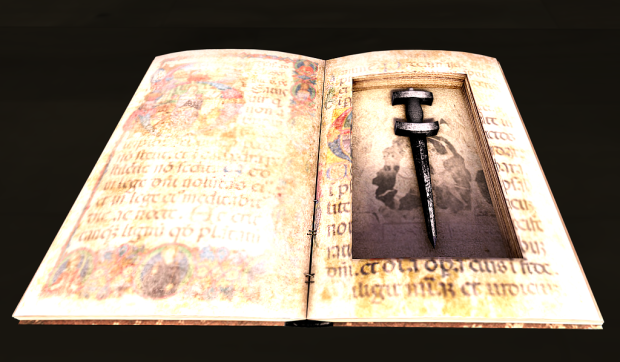 You can get yours at the Arcade Gacha Festival opening September the 1st.. may the odds be ever in your favor! 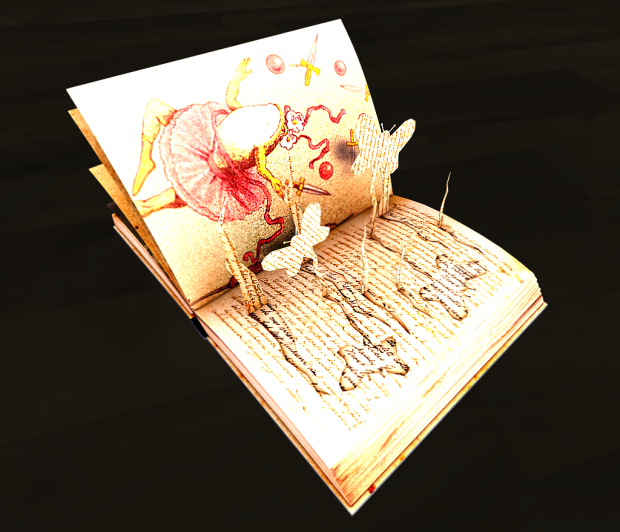 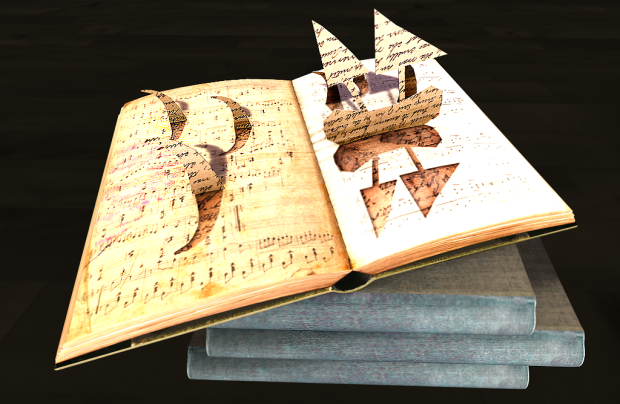 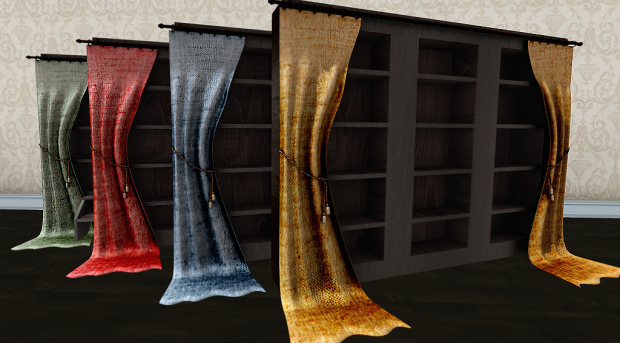 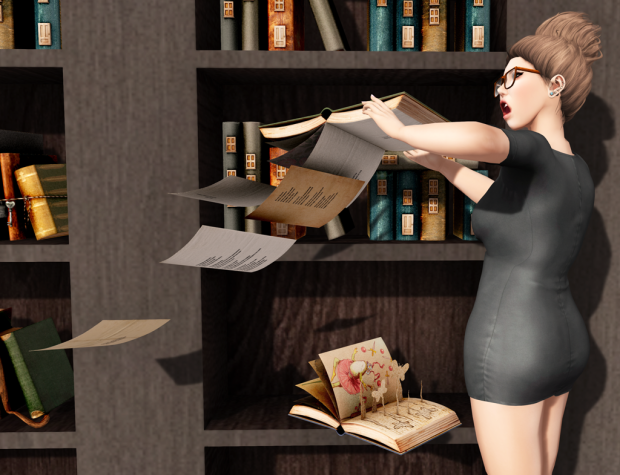 Much to my delight, Candy from Glam Affair for the Arcade Gacha fest that is only a week away came into my life this afternoon! There are 14 skins to try for in total. 10 America skin tone and 4 Europa skin tone and I’m not certain which ones are the rare but they all have a unique beauty and I just adore the lips on these. There are four different brow options and even a cute little freckle layer!

You can try for Candy next Sunday when the Arcade Gacha opens its doors, and boy do I ever look forward to it!

The hair that I am wearing is from Liquience Hair who has just released three brand new styles, they are super cute and you should check them out!

The Liaison Collaborative has just opened a new round for the Poser Pavilion at the Garden and the lovely Gidge Uriza of Pretense poses has sent me her Area 51 Shadow Box! This is really cool.

When I got in the box and posed myself, I went to turn on the shadows and found this cool design/projection type thing and I really liked the effect. You can change the colors by clicking the sides to either Yellow, Pink or the Silver that I’m showing now and it features 11 poses. I like this a lot and think that the shadow projection thing going on is really cool!

I’m wearing: Hair from Truth which is newer called Lyma. A new shirt from Sn@tch, shorts from Mon Tissu and the new shoes from Gos Boutique called Paris. My skin is from Pink Fuel and is called Harley.

Fall is coming and for me that means pulling out my old favorite soft and worn flannel shirts!

My daughter Ryleigh of {Petite Bowtique} made these cute mesh shirts for the whole family.

I saw her wearing one and I was like you are gonna make those for Mommy to wear too, right? She was like yep and she thought it would be a cute idea to wear them and take a photo together as a family and I cannot say no to that adorable little face! So troops were wrangled in and we found a cute pose from .click. and there you go an adorable Autumn photo and we all match!

All Hair from Exile

Can you keep a secret?
I’ve always been a secret keeper, you could say that I’m a connoisseur of secrets. I love words, I love the way they collect at the helm of my tongue just waiting for the slip. However, I always take a breath and I hold it in. I hold it in because some secrets are not mine to tell. Some secrets I even defend whether it’s true or not it doesn’t matter I like the story within.

My favorite secrets are the the ones that I keep close to my heart.

I could tell you about the time that I had that unplanned kiss many years ago. I was in her car, it was raining out and we had the best time without even trying. We went to see a movie but neither one of us could get in because we had forgotten our ID so we went to Denny’s.

We both had just broken up with someone and she was straight and I swear it was the rain but an unfinished sentence led to our lips meeting and sending sparks. I could almost see one as the lightning illuminated her car. She looked slightly taken by surprise and gave me a shy smile and I only paused for a moment before I kissed her again.

The rain strummed on the roof prefacing the guitar to Echo and The Bunnymen’s version of “People are Strange..”.
We kissed until we were out of breath and she started to tell me something about how she didn’t mean for that to happen and then I didn’t know what to do so I got out of the car and stood in the rain.

I half hoped that she would get out with me but she started to drive away and I went and stood on my porch, half hoping she would change her mind and come back. I had hoped that something would happen from it but she went away to college after that Summer and so did I.

Every now and then I think about her and I will go out and stand in the rain letting the memory of that night replay and my lips curl up into a smile.

This month with Collabor88 having a big birthday round I saw this house from Barnesworth Anubis and knew that it had to be our new home. I’m not completely done with the outside or the inside but tonight I took some pretty photos of what I’ve put out so far. The green house that you see is from Vespertine (also at Collabor88) and all of the veggies and flowers are from DDD which has amazing plants and veggies and things for very low prims – I love buying their mesh fruits and veggies for my garden!

The alien playset that you see is from Lark and is adorable (and low in prim for all you get) and you can get that at Liaison Collaborative along with some really other cool things this round! Very fun stuff! If I didn’t mention anything – feel free to comment and ask and I’ll tell you where its from. 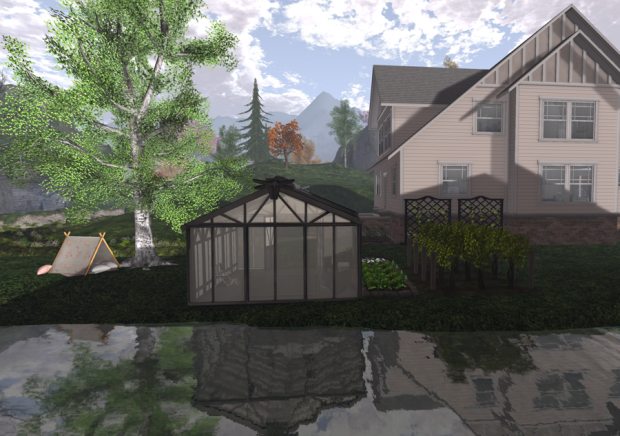 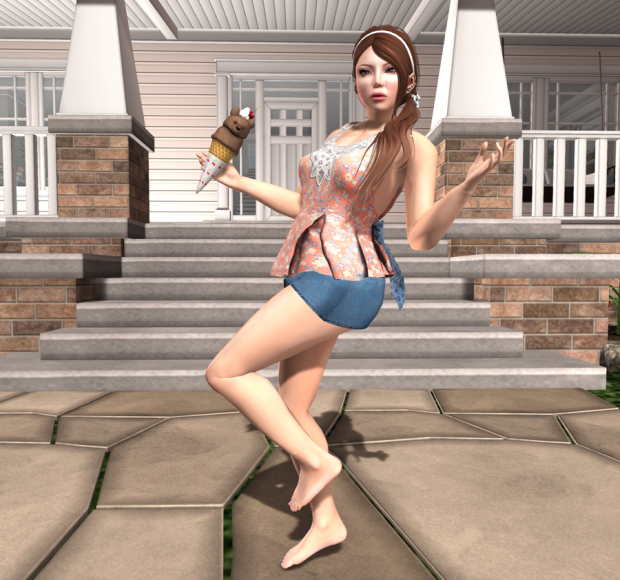 Atelier Kreslo is having an Ice Cream Festival and you are all invited! The cone that I am Holding is made by Octagons Yazimoto and is called Pizzy’s Beary Cone and I love anything with bears so this was my first choice but I plan to go collect as many ice creams as I can and they are only 35L a piece. This event would be great for the young or the young at heart!

Seraphim did great coverage of the event here: http://seraphimsl.com/2013/08/16/the-ice-cream-festival-opens-today/

I am also pleased to say that TDR has a great round and I am wearing something new from Fishy Strawberry! I am so happy that they are back and I looked forward to seeing more mesh from them. I love this outfit. My pose is new from !Bang – who just released a slew of fantastic poses and my hair is newish from Truth which I thought went perfect with what I was wearing.

My house in the back ground is the newest one from Barnesworth Anubis and I will have pictures of it soon but if you haven’t already seen it go to Collabor88 and check it out! I’ve worked on taking pictures of this dress most of my day today. I just couldn’t get the right shot at first. It was suggested to me to go to the Worlds End Garden, somewhere I’d never actually been before and that is where I got my shots of this lovely necklace, head piece and dress from the Lu sisters of Paper Couture.

You see, I’ve loved Paper Couture ever since I remember them coming out I believe it was 07 – I’ve always thought this was a special take on Second Life fashion, and If I were getting married in SL this is what I’d wear. I took too many photos but I was inspired. I wish I could by all the dresses and jewels and it took me a half hour just to pick out these and I am very pleased.

If you want a taste of something special in SL go check out Paper Couture: maps.secondlife.com/secondlife/Tableau/165/104/23 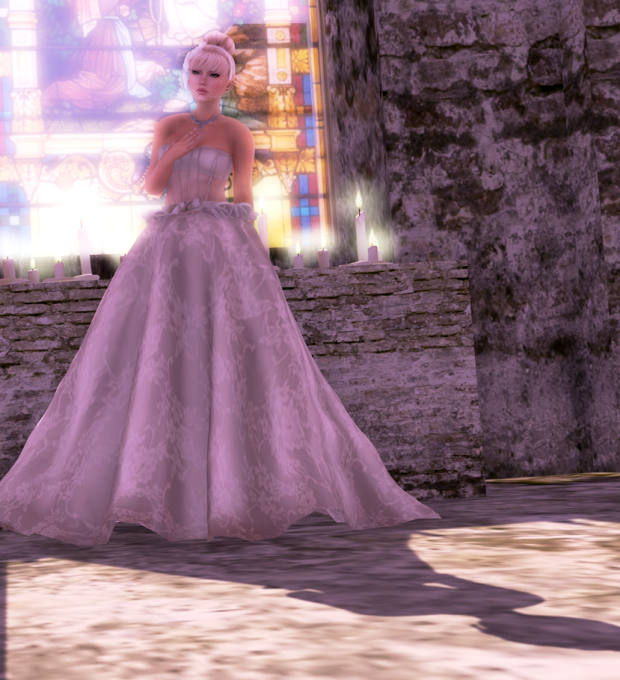