So I thought about this and well it’s not so easy but I will take a stab at it!

1. Poof. I wish that they would bring last names back. I miss seeing the different and neat-o last names and I kinda liked making alts just to have the name here and there. Maybe that was part of the problem but I just think “resident” sounds so… bad. You know? I don’t want to be a “Resident” I want to have an identity and a last name!

2. I wish that I personally had an easier time of being outgoing and that I could meet greet and socialize with the greatest of ease! I’m not sure why but I don’t have the easiest time of talking to people. I don’t really make an effort to change it though either, so there is that!

3. I Wish that it were easier to meet people that I do make friends with sometimes, like well geographically closer and all and in sync. Some people that I have met I would just like to reach over and give a hug to one day but with limited income it makes that really difficult to give your friend a hug or watch a movie with them in person.

I am wearing Hair from Truth, which is on sale right now! My pose (with the awesome butterflies) is from Ma Vie at the Attic @ The Deck. Happy Sunday! I actually meant to do this post earlier in the day but – the day ended up getting busy and other things happened.. but that is ok because I got my Dutchie yoga work out on this morning.

You can find out the technical details and even see a video of the the mat in action here: http://dutchiesotherlife.blogspot.com/2013/04/sequenced-yoga-mat.html#more From my own experience though it’s a pretty nifty mat with a ton of animations for yoga, stretching and relaxation. I headed over to Baja Norte and rezzed out this mat and felt at one with the sound of the ocean, this mat actually makes me want to start yoga again. Maybe next time I can do what my avatar does. I took a few snapshots and grouped them below so that you can see the range of motion but it’s really better seen in world here @ Dutchie’s Mainstore: http://maps.secondlife.com/secondlife/Dutchie%20furniture/176/129/22

So I didn’t really plan to do this post but it just kinda happened, so go with it.. yeah? Anyhow if you don’t know Mon Tissu had a surprise to me release today. This dress was one of the things that is new! They are so many beautiful colors and it was hard to choose just one but, well I adore this “Day Dream” Dress.

I am also wearing the Lolita espadrilles from Gos Boutique and using poses from Adorkable. This hair is from Epoque and I love this bun style and this skin is from Glam Affair and it’s called Margot to be found at Collabor88. I did a bit of shopping today and wanted to share some of the new things that I picked up.

First on the list is that ColdLogic had a new release, some cute capris, shorts and tanks to liven up your wardrobe. I also have been loving these new flip flops from Gos Boutique that are an accessory to the flat bare feet which there was also an update to.

This hair is new from Wasabi Pills and can be picked up at the Fantasy Fair, as that is still going on! These poses are from Diesel Works. My skin and Makeup layer are from Glam Affair. The skin is at Collabor88 and the makeup layer is at the Cosmetic Fair.

Dysfunctional Dolly Designs is a new to me store that I found out about from the Fantasy Fair. The booth that they have at the Fantasy Fair on Dragonspire can be gotten to through this link: http://maps.secondlife.com/secondlife/The%20DragonSpire/78/160/39/ If you would like to check out this beautiful low prim mesh bathing set.

The Fantasy Fair opens it’s doors at 6 AM and that is in a couple hours from writing this post. The items in this set from Dysfunctional Dolly Designs are quite cute and also inexpensive and the tub comes with a good variety of animations and you can also try out changing the texture a bit on the feet of it. The Antler candelabra in the photo is one of their Relay for Life contributions and it is quite cool. When I was taking the photos for this post I we pretending that I was staying in a quaint country inn. It’s fun what the imagination can do. 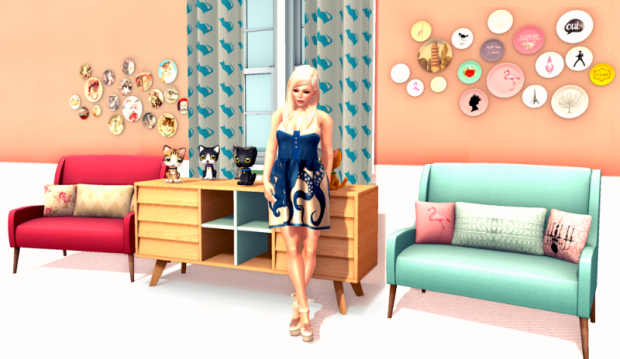 Collabor88 opened two weeks ago and the theme this month is Kitsch and I think they about well covered it! I found some really cute furniture from Floorplan (as shown above) and some fun cats from Intrigue that are bobble heads!

The Sea Hole also made this really cute dress with octopus tentacles on it which I love, and Laviere made this really cute mesh hair style. My skin is the Margot skin from Glam Affair which I have been wearing, a lot! Lots of good things this month and you still have plenty of time to get there!

I am also wearing Lolita mesh shoes from Gos Boutique and poses from !Bang.

They first thing that I wanted to do today when I woke up and logged in to Second Life is find a new outfit to wear. I went around to a few places that I have not been in awhile and ended up finding what I was looking for in Coco Designs.

I love the bare midriff top and lacy skirt so much, I paired it with some Gos Boutique Sophia heels, and a necklace from Maxi Gossamer. I did not find the hair until a bit later at Tram. Oh Tram, you made me a happy girl today. I’ve been wanting a hair like this in Second Life since I first even heard about mesh. I’m in love with this style. The skin that I am wearing is the clean version of the Margot skin by Glam Affair at Collabor88 paired with a make up also from Glam Affair that will be soon available at the Cosmetics Fair.

I do hope that you are having a lovely day! Want to relax in Second Life, play spa, get a massage and unwind while perhaps even getting that ever elusive “Happy Ending” without the guilt? Dutchie has just released these really neat Vintage Massage table for you to go and get that ultimate “Spa Experience”. –

You are totally in control of choosing your own adventure. You can start off light with a nice back rub while a modest towel covers you and slowly work your way into more intimate poses. There is already a great post detailing the animations and prims and what not and I took many photos below. Or better yet, you can try them in world: http://maps.secondlife.com/secondlife/Dutchie%20furniture/37/61/22 So day two of going through my Collabor88 stuff and this furniture by Barnesworth Anubis makes me think of the 50’s. It’s sorta kitchy and so I kinda wanted to do a fun post wearing the Soda Pop dress from Deco, which is also at Collabor88. My skin is the Margot Skin from Glam Affair.

The pose that I am using is from Diesel Works which can be found at Pose Fair. It’s a pose normally for a male and a female but it was easily modifiable for two women.

I am also wearing hair from Truth, and shoes from Gos Boutique.

Once again, I have fallen prey to another SL Meme and this one is from Strawberry Singh which you can go see her post here: http://strawberrysingh.com/

Before we get to the Meme: I am wearing New stuff from Collabor88. Skirt and Shirt separates from Tee*fy and skin from Glam Affair called Margot. My pose is from Marukin, also at Collabor88.

First SL Friend:
Christen Tristen. We hardly ever talk anymore but she was the first person to show me Elikatira and even gave noob me 200L because there was a sale going on. Very sweet girl who taught me a lot about SL when I was new.

First SL Kiss:
Honestly I don’t even know. I was a hussy back then!

First SLex time/place/partner:
Sumo’s was my hang out. They had dance poles anyone could dance on and get tips from and that is how I earned my first skin lol.

First SL Partner/Girlfriend/Boyfriend/Wife/Husband:
Ricotta Capalini. She was a RL girlfriend at the time.

First SL Job:
First real job was at a place called the Dakota Marine Park as a host. It was actually designed like a Marine Park we had trivia nights on Saturday and contests throughout the week like fishing, It was a super fun job and it paid really well.

First Encounter with a Linden:
I don’t remember this.

First Encounter with a SLebrity:
It was Callie Cline actually.. back in 2007, and I asked her to take a photo with me. I think that I still have it.

First SL Sim you fell in love with:
That would be Butterdish and I miss it.